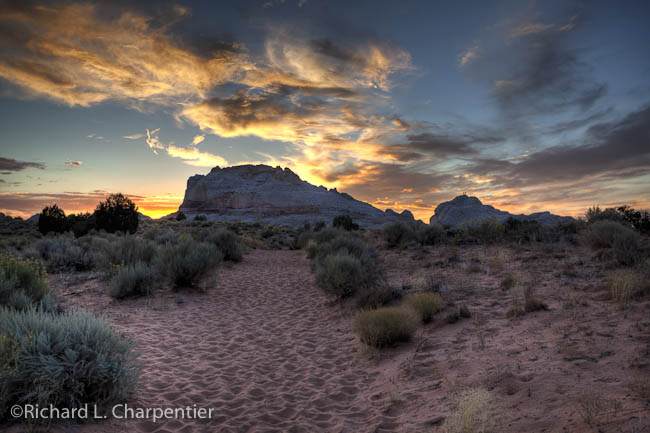 Yes indeed!  Since starting to visit the Vermillion Cliffs, Coyote Buttes, & White Pocket I can honestly say I’ve never run into so many people before.  It was amazing to see arriving on Friday how many people were visiting the amazing rock formations.

Setting up camp in the afternoon we had to figure out where to throw the tent and park the truck.  4 other vehicles were already in White Pocket.  2 were set up back to back near my favorite camping spot.  An awning was drawn between the vehicles, and the owners were somewhere out wandering the rocks.  Another rental vehicle (a Kia AWD or 4WD) was parked next to an interesting tent.  I made a bet right off the bat that the rental vehicle was being driven by German tourists.  Just a hunch……

If you ever have the opportunity to buy a low mileage used vehicle in Utah that was formerly a rental….run!  The things that are done to the rentals in Southern Utah are astounding.  The vehicle we saw should not have been out in the White Pocket area.  From the looks of the caked mud and look of the scrapes on the bottom I’d say that it wasn’t intended for what was done to it…..  Poor Kia!

Another large Suburban was also in with a tour group of 4 men with cameras as well.  These guys were loaded for bear and headed in as we set up camp.  The thing I noticed about all these guys on the tour were the covers on their tripods.  All 4 photographers had the coolest covers on the tops of the tripods.  Kind of like golf club covers.  I mention this due to the envy I felt.  I think I’ll pick a worn out smart wool sock and use it as a tripod cover on my next outing……

Who knew there was such a thing as a cover for the top of your tripod?  I’m seriously out of the photo gear loop.  Quick, somebody hand me my B&H Catalog!

After figuring out where to set up camp and getting camp put together we too headed into White Pocket.  Overcast skies, the sun hidden for half the afternoon, and a mellow breeze made for a good late afternoon of shooting.  We did have to work around getting other photographers in our shots.  Seriously, everywhere I turned there was somebody.

Fortunately after many trips to White Pocket I knew a few areas that people don’t visit.  And I also knew that the lighting would work well in those areas at the end of the day.  So we did have a chance to shoot unobstructed late into the afternoon.

Finally we were all ready to head in and have some dinner.  We made our way out of the formations and back to camp.  Other parties also made their way back to the parking area as well, and it seemed to be a flow of people for a while.  Even the guys with tripod covers exited at the same time we did.  And the neighbors with the Kia also came out…….

German Tourists!  I knew it!  🙂  The beaten rental vehicle told me all I had needed to know!  🙂

The evening was very different than any other spent in White Pocket.  The sound of several small children crying could be heard (into the night, and during the early a.m.).  Flash lights were bobbing all over the area. It was odd.  So used to being out there completely alone.

A decision was reached quickly on our first night out.  Shoot more of White Pocket in the morning and then move along to a less trafficked area.  The Grand Staircase.  Everyone agreed, crying babies in the night combined with “crowds” was more than enough.  Fortunately we made the right call too!  As we headed out of White Pocket Saturday morning we were greeted with a stream of traffic into the area, including 6 4 wheelers carrying 10 people in total.  Looked like they were heading in for a few days!

As for the rest of the trip…..I’ll write more in a later post.  And don’t get me wrong, not complaining about the other folks at the pocket.  Just very different from all the previous trips.  I’m going to have to rethink workshops in the area going forward.  Part of the fun of the workshop there is the privacy and ability to work with photographers who come along without the distractions of other large groups.  Of course, I’ve got so many other great locations in mind that I don’t think it will be difficult to figure out workshops for next year!

Now, without any further words here are a few more quick edits from White Pocket!

Online Classes from the Airstream Chronicles

Want to create travel photos like the ones on this site?  Want to build your own website to show off your travels?  Well, click here to learn more!