This weekend has had a lot of events going on.  The Artwalk was fantastic Friday night.  A lot of people through.  And I think Casey’s works got a good deal of exposure!  Sure hope he had fun with the event.

Yesterday I was supposed to do a one on one class, but it was cancelled at the last minute.  That was okay, we’ll reschedule.  It gave me time for something totally different.  Walking around town photographing the Western Heritage Days event.  I’d been hoping to get a little time in shooting, but with the day freed up I had more time than I thought I would. 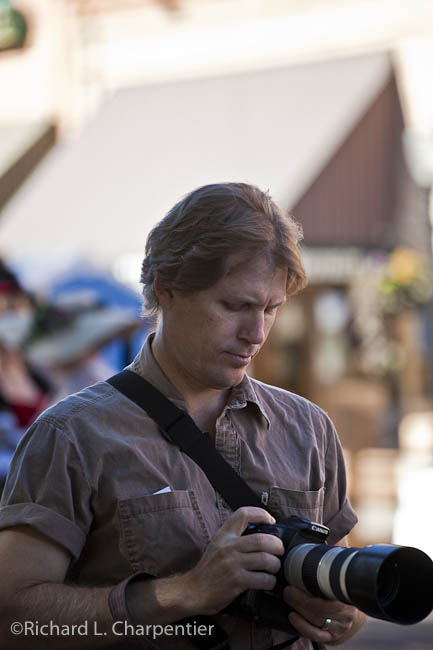 Chris Marzonie having a "what does this button do" moment......

Chris Marzonie left me an e-mail first thing in the morning.  The Elks Theater would be open from 10 – 12 a.m. and we could photograph there if we like.  I gave him a call, told him my plans for the day had changed, and we planned to meet up to do a little shooting.

Interestingly enough there were a ton of photographers out at the event.  And a photo contest is also going on.  I won’t be entering anything, I never do.  🙂  I’m out shooting for different reasons.  Back drops, stock items, and just for grins.  Also I wanted to get some images for future composites.

In addition to all the folks dressed up for the occasion there were also live acts throughout the day.  The photo above is from one of the earliest performances.  The group was pretty good and I listened for a few sets.  Unfortunately during the earlier hours the lighting was SUPER HARSH.  Whiskey Row was closed off for the stage and shoot outs, and I’ve got to say it isn’t the best place for taking pictures mid-morning.  Too bad the events couldn’t go on right on the Courthouse Square instead of in the road.  I’d rather deal with dappled light than the harsh light!

Chris and I did manage a quick trip to the Elks, but we were very short on time.  With historical societies roaming the square, hanging out at Sharlott Hall, and participating in different activities it was hard to round folks up.  Plus with a short time frame before show time at the theater I didn’t see myself setting up speedlites everywhere.  I decided on just the 580EX II, my Lastolite EZ Box, and Chris as my Voice Activated Light Stand (VAL).  Chris made a great VAL!

I cut my day short as I had to do several dozen other things.  George Molnar called looking for another giant canvas this week, so I got that started.  Veneering will happen today.  In addition several other clients had been coming through the gallery during the day looking for print and imaging services.  So I had to find out about all of that.  Finally, Josh asked me to watch his dog for the evening.  So there was that too!

To wrap up, I did toy with some images last night before bed.  I took a few of the characters I saw yesterday along with a tent / tarp thing and a photo from the Northwest side of Granite Mountain and made a super fast composite.  No, it’s not a finished product.  Just me playing around with concepts.  3 different people, one landscape, and a tent.  Then I went for a Sepia feel since this was to reflect an old time image.  In the end, I think the image looks like a poorly done flier for a B Movie western from the 60’s.  Hey, that’s what I get for spending less than 15 minutes on this particular composite.  I’ll keep playing with the idea!

Online Classes from the Airstream Chronicles

Want to create travel photos like the ones on this site?  Want to build your own website to show off your travels?  Well, click here to learn more!